2. Why Will SocialGood Continue to Grow in Popularity Globally?

(1) With Shopping Mining™, Everyone Profits

The Social Good Project is a global activity based on a vision of “making society better” that transcends national, racial, religious, and cultural differences, and in which all people around the world can participate.

In March of 2019, the “SocialGood Cashback” service was launched.

Our company will provide users with a portion of their purchase price in SocialGood cryptoassets (abbreviation: SG) free of charge when they buy items they like at partner companies, such as Amazon, Alibaba, Apple, and eBay. 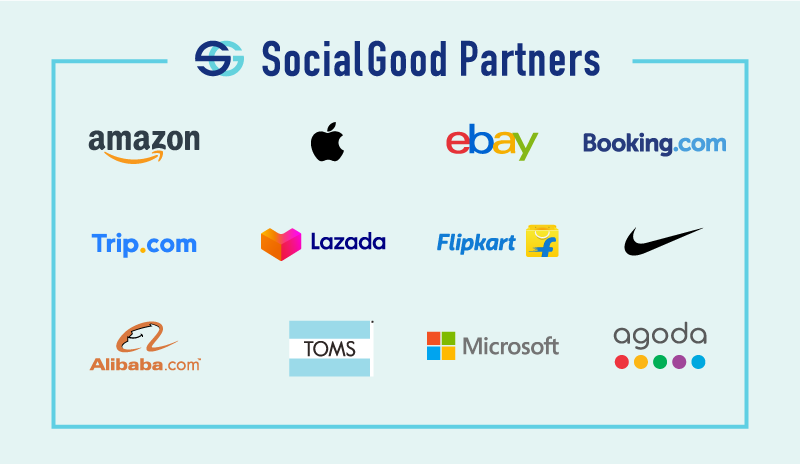 With Bitcoin Mining, Bitcoin can be obtained by using one’s calculation abilities, but with SocialGood, coins can be obtained simply by shopping. In other words, it is “Shopping Mining™.”

The SG received from Shopping Mining™, has the following functions:

Users who have obtained SG from Shopping Mining™ will be able to request the operating company to buy their SG if the price falls, and can sell it in the market if the SG price goes up. Since all users received their SG at zero cost to them, they will always gain economic benefits.

We have already obtained multiple patents for this coin mechanism which holds both exchange value and asset value.

Each player in this ecosystem receives the following benefits:

In general, coins that have limited issuance are often referred to as digital gold. You can clearly see that since the coins have supply restriction, when the number of users and holders increase, the coins' market caps increase as a result of the demand-supply mechanism.

The main logic behind why Bitcoin’s price rises is because of the “existence of issuance limits.” The coin, which has another “price rising logic” in addition to a limited supply, tends to have a high CVPU.

In the same way as our company works, other coins’ projects where the value increases with shopping, have a CVPU of US$13,600 (this figure is the weighted average of multiple projects).

When you apply this CVPU to SocialGood, with our current user numbers totaling 90,000, the market cap at the time we are listed is estimated to be US$1.2 billion. On the other hand, even if for some reason SG has a CVPU of US$2,000, you could still conclude that SG's market cap would be US$180 million.

The CVPU level depends upon the entire cryptoasset market situation, but, in any case, coins’ market caps increase when the number of users increase.

As will be described later on, there is an incentive for the team when SG's market cap reaches US$5 billion. Assuming the current market conditions, the coin's market cap will exceed US$5 billion, when the number of users reach 2.5 million people.

Exactly how many cryptoasset investors would like to easily receive an asset of economic value for free?

There are an estimated 70 million cryptoasset investors (cryptocurrency users) worldwide, which is about 1% of the world’s population. Some predict that with the circulation of Libra, which is expected to draw in around 2.3 billion people, this user range will expand even more. It is forecasted that within 5 years from now, cryptoasset investors will surpass 1 billion people (reference: Coinbase).

SocialGood has a unique business model and design which have already been patented and are rare. Furthermore, because it’s easy to receive this asset for free, it has the ability to appeal to not only the crypto asset market, but also to the world’s general consumers, which consist of 7 billion people.

In light of the fact that general consumers can also become future users, we have made 100 million SocialGood users a milestone for us to achieve by the year 2024.

The more users increase, the more the coin asset value increases. Society will also become better. We will provide such a valuable coin to users for free through Shopping Mining™.

(5) In the Event of Abnormal Situations in the Market

This project was built with the following preconditions in mind:

However, the probability of the following abnormal situation is not zero:

In such cases, the following situations will occur to our project:

In these situations, it would mean our operating company would cash back consumers, who use our service while shopping, in fiat. This type of business is already widespread. For example, Ebates (currently known as Rakuten) already has over 10 million user, over 2,000 partner retail companies, and their gross merchandise value is over US$10 billion. It would mean our company would operate solely on advertising revenue.

In other words, the SocialGood Cashback business can continue as a global cashback operator even if there is an abnormal situation in the overall market conditions and/or SG’s cryptoasset price.

As long as the business is continued, the operating company can use advertising revenue to fund the buyback of SG from the market, even in the unusual situation that the price of SG becomes stagnant. In short, it’s difficult to imagine a long term slump in the price of SG.